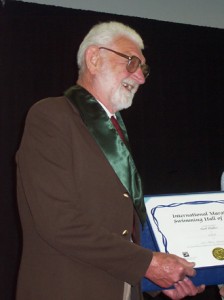 Carl was born in 1927 and died on the 9th May 2018 aged 90. A long-time member of the BLDSA, he introduced his daughters Catherine & Beverley to the sport of open water long distance swimming. During his time with the BLDSA Carl worked tremendously hard for the Association but always said that he owed the BLDSA a great deal, as his girls grew up within the swimming ‘family’, spending their formative years training, swimming, kayaking and helping others. He never needed to fear that they would ever get into any sort of trouble.

For many years the Association’s rescue boats were stored, maintained and crewed by Carl and as the years progressed Grandad Carl brought his grandsons Daniel and Matthew into the fold teaching both the ways of Rescue Boat operations. He contributed many, many, hours of effort all year round over many years and saved the Association a great deal of money by his work.

Carl was a true gentleman and would always be polite to everyone he met and interacted with, and his gentle spoken voice was always listened to attentively by all. He will be missed by Family and Friends alike.