Home / About Us / Tributes / A Tribute to Maurice Ferguson 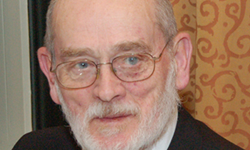 On the 30th May 2008 Maurice Ferguson died aged 75. Born in Eccles, Lancs in 1932, he went to Eccles Grammar school where at the age of 11 he met Milly who later became his wife. They had been married for just under 54 years.

Until he was about 30 he could only swim a few lengths in the local pool and it wasn’t until his children started to learn that he got really interested. He joined the lifeguards at Warrington and did his exams and while he was there someone asked him if he would man a boat at the Pickmere Open Water race, which he did. He said that seeing all the swimmers take off at the beginning of the race made him want to join them. Following this he joined Warrington Dolphins in 1967 and attempted Pickmere however, he succumbed to the cold a few times, but being Maurice, he persevered until he eventually completed his first three-mile swim at Pickmere Lake in 1970. Not content with participating, he organised and administered the Pickmere Lake event for seven years and was elected club president of the Dolphins.

After 30 years and a few illnesses, he was slower than when he first competed, but he still was a swimmer who would almost certainly get there, he swam virtually all the long distance courses in the U.K., as well as officiating and crewing on them. He was a person of great tenacity and mind bending attention to detail. Long distance swimming in Britain was made all the more enjoyable by the presence of one or more of his family of three children, four grandchildren and wife Milly, either in or on the water at almost every swim. His sons Simon and Kevin both crewed for Maurice. He was very proud one year because Kevin, Simon and himself all swam together at a BLDSA event.

Maurice was a member of the executive committee of the British Long Distance Swimming Association until his death and held many positions on the committee. He gave up hours of his time to help the association and held the following posts:

In May 2004 Maurice was elected into the Marathon Swimming Hall of Fame, Ft Lauderdale, Florida. This is a major honour and is a good indication of how much time and effort he put in to making our association run as smoothly as it has – a well deserved award that he was very proud to receive.

He will be sadly missed by many.