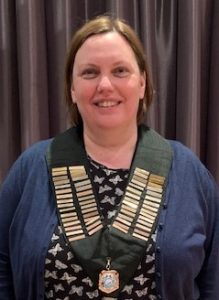 An introduction to your BLDSA PRESIDENT 2020 Amanda Bell

I would like to welcome you to the British Long Distance Swimming Association (BLDSA) and thank you for joining for the 2020 season.  The BLDSA has lots on offer for swimmers from those starting on their journey to those who continue year after year completing training swims with the association as well as completing their dream swims.

I started open water swimming in 2011 and was introduced to the BLDSA by a swimming friend.  I was nervous about entering my first swim as I thought that my swimming wouldn’t be up to the same standard as others.  I was convinced and entered the 3k Wykeham swim and was delighted with the greeting I received by a warm and friendly association.  Yes, there were swimmers that were faster than me, swam further that I ever thought possible and had amazing stokes but their help and advice was forthcoming.

From the first event my swimming progressed at a rapid pace and saw me complete the BLDSA Ullswater in 2012.  This swim really opened my eyes to not only what was needed from a swimming during a long swim, but also the level of support that was needed, along with how the BLDSA safety team would always go above and beyond.  My swim would’ve been unsuccessful had Martyn Coates (safety team) not stepped in to support me and my kayaker.  From there, it was to tackle a swim that a year previous I would never have thought possible, my first one way Windermere. I continued after this completing a number of BLDSA events including Champion of Champions South event in Dover.  This was certainly a tough event and the first event completed saw a low sea temperature which made it extra challenging.  I went on to complete a two way Windermere swim in 2013 and English Channel swim in 2014.  Other swims I have completed include Round Jersey swim in 2016 and BLDSA Loch Lomond swim in 2018. My swimming has been put on hold slightly as a help my daughter, Emma, prepare for some open-water swims this season.

I wish you well for the 2020 season and hope you have many successful BLDSA swim.  If you can, why not offer your support and volunteer at one of our swims.  Have a fantastic season, dream big and work hard!