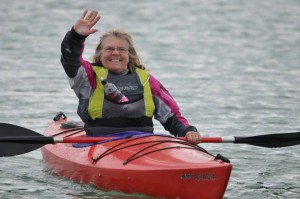 I was born in Bingley many years ago!!!. I started swimming at Bingley baths at the age of 10 and went on to join Bingley swimming club. I was never a brilliant swimmer but did a few local Galas where I met Anita Lonsbrough and got to hold her Olympic gold medal, now that’s showing my age!!. Most of you younger swimmers will not have even heard of her. I am not good in cold water as my hands and feet soon go white and numb. If you saw me in Bala last year it was something you may not see again for years unless we have another hot summer and the Officials need to cool down again.
I was brought back in to swimming through my daughters who I sent for swimming lessons never thinking they would take up where I left off. I ended up taking them to the pool most nights in the week and was asked to help out at these sessions. I ended up taking my swimming teachers qualifications, joining the committees at Bradford Dolphins S.C. and City of Bradford S.C where I held the positions of Social secretary, Membership Secretary, General Secretary and Gala entries Secretary. I also helped out at galas timekeeping, recording and many other jobs. I travelled the country to different Galas both club, ASA, North Easter Counties, Welsh Nationals etc.

In 1993 Dee was asked by her coach if she would like to try Open Water Swimming as he had been asked by the ASA if he had any Junior distance swimmers. After a few trial sessions in a local cold water reservoir we headed off to Rudyard Lake then we ended up at a number of BLDSA events. The pool was never the same again and a few years later Liane decided to follow suit. So once again I was up and down the country ferrying them about. As per usual I ended up helping out. I have been the BLDSA Dinner Secretary since 2006 and have been on the committee since 2008 other jobs I have done include race control, first aider, timekeeper, Referee, Safety Boat crew, updating the website and collecting the information for the Annual report, co-ordinate the swim list, helping with the data entry and organisation of Waterloo Lake, Rivington, Wykeham and Windermere. I have been, mum to many, dog minder, tent erector!! and even kayaker (although I struggle to keep up with my daughters!!!).

Somewhere along the line I must have got addicted to the sport as I am still here even though the girls have grown up and can now drive themselves. It does get me out in to the countryside and the air is sometimes very fresh and cold. On some occasions, standing on the end of the jetty makes me appear as though I have been swimming fully clothed! The rewards are worth it though, seeing all the swimmers achieving their goals and even when they don’t make it the first time many come back and achieve their aim. They are all far better than me. I have a great admiration for anyone who can get in that cold water, never mind the great distances some of you go on to endure.

I have made many new friends in the BLDSA and continue to do so each year. It’s like a big family who try to help and advise one another and I hope this will remain the case for many years to come.

My hobbies don’t get much of a look in these day’s but the books, tapestries etc can wait till I am no longer able to get to the swims!!!.